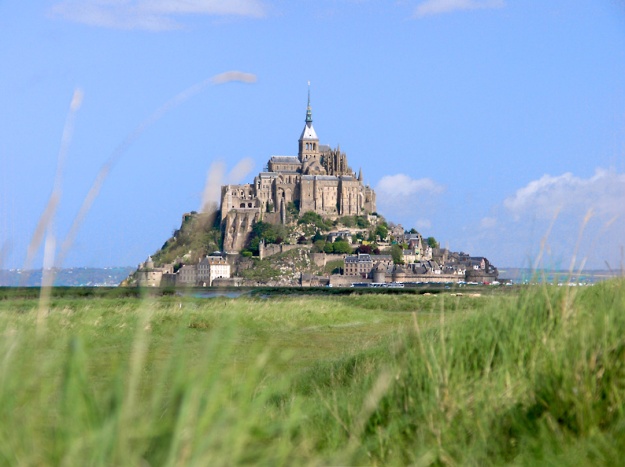 It rises like a mirage on the horizon. Thirteen hundred years of history…..of faith…of contemplation and prayer. An act of faith and obedience. 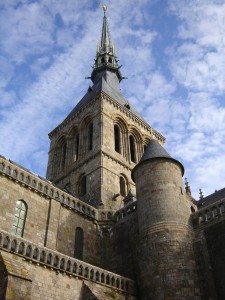 Mont St. Michel began as a modest church in the year 708, after St. Michael appeared to the  bishop of Avranches in a dream, and instructed him to build a church on top of the rock.  In 966, the Duke of Normandy gifted the island to the Benedictines, who expanded the Abbey over the centuries .  Today, the entire island is a UNESCO World Heritage Site,  and you’ll see St. Michael in gold, atop the tallest spire, slaying a dragon…to symbolize the constant struggle between good and evil.

Mont St. Michel is the most visited attraction in France outside of Paris, attracting over 3 million visitors per year. 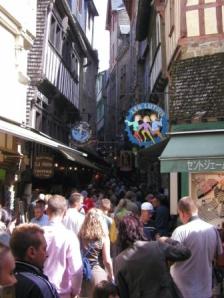 Most are day trippers who make their way across the causeway, up the narrow steep street, past the gauntlet of tacky souvenir shops and astronomically priced omelets.  We would have loved to stop at Mere Poulards for the incredibly fluffy omelet, but no way we  could justify 100 euros for scrambled eggs. Keep going past, and a thousand steps up…up…further up.

Once inside the Abbey, marvel at the beautiful stonework, the  columns and arches, a mix of Romanesque and Gothic architecture.