Another great day trip, head off to explore the magnificent champagne region of France. With France’s highly efficient TGV fast trains, you can visit Reims (rhymes with sconce) in a comfortable day trip from Paris. With a population of 200,000, Reims is known as the City of Champagne, for the 155 miles of underground chalky caves criss-crossing beneath the city, which provide the perfect temperature and humidity for storage of the golden bubbly. And while most of the world’s leading Champagne houses are based here, there is more to see than just champagne.

From the train station, it’s about a 15 minute walk to the famous Cathedral de Notre Dame, where 26 kings of France were coronated. Admire the amazing Gothic architecture. Built in the 13th century, it was badly damaged in WWI, rebuilt in 1938, and is now a UNESCO World Heritage site. 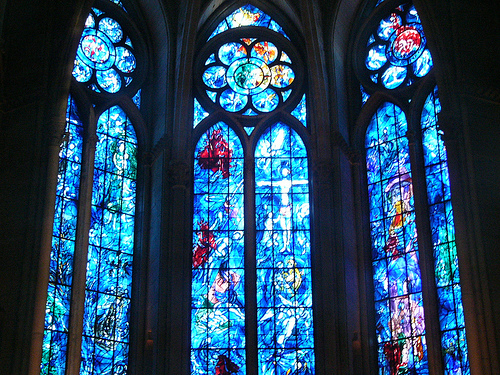 Reims is also famous for being the place where WWII officially ended. Musée de la Reddition (Surrender Museum) at 12, rue Franklin Roosevelt 51 100 REIMS, is the site of the former war room of Allied Commander Dwight Eisenhower, where Nazi Germany surrendered unconditionally on May 7, 1945. The former school building has been declared an historical monument, and you can tour the war room, and view the strategic war maps still on the walls. NOTE: The museum has been closed for renovations, and is scheduled to re-open Spring 2009. Check their website or call for re-opening dates.

If you’re not into history, then just take a taxi from the train station straight over to Piper Heidsieck. (51 Boulevard Henry Vasnier). This is Disneyland for champagne lovers. Board the automated champagne train for a 15 minute tour which explains the whole process of growing, harvesting, blending and aging the fine bubbly. Display near the end of famous movies where champagne featured prominently. (Play it again, Sam….of Casablanca fame).

Be sure to stop in the tasting room at the end. You will taste three varieties of the beautiful bubbly, served with a variety of macarons.
(Update – Sadly, Piper Heidsieck has closed their lovely cave in Reims, and moved farther out into the vinyards, so no more champagne train! Sorry!!)

From Piper Heidsieck it’s a short walk over to Taittinger. (9, Place Saint-Nicaise). They offer 1 hour guided walking tours. A gracious interpreter leads you down into the chalky limestone caves and explains the aging and fermentation process, the riddling rack, etc.

The caves are quite impressive. You’ll see a museum-like photo display of famous celebrities, and dignitaries enjoying Taittingier throughout the last century. Once again, at the end, you’ll be escorted into a tasting room to sample several vintages. There is a nominal fee for this tour.

Getting there:
From Gare de L’Est there are several TGV trains in the morning, and several retuning in the early evening. 62 Euros is the current unrestricted 2nd class fare, but you may find cheaper tickets if you book in advance. TGV trains ALWAYS require advance reservations. Click here for the English website for France SNCF train schedules: